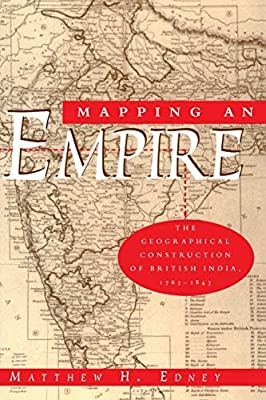 Mapping an Empire: The Geographical Construction of British India, 1765-1843

In this fascinating history of the British surveys of India, Matthew H. Edney relates how imperial Britain used modern survey techniques to not only create and define the spatial image of its Empire, but also to legitimate its colonialist activities.

“There is much to be praised in this book. It is an excellent history of how India came to be painted red in the nineteenth century. But more importantly, Mapping an Empire sets a new standard for books that examine a fundamental problem in the history of European imperialism.”—D. Graham Burnett, Times Literary Supplement

” Mapping an Empire is undoubtedly a major contribution to the rapidly growing literature on science and empire, and a work which deserves to stimulate a great deal of fresh thinking and informed research.”—David Arnold, Journal of Imperial and Commonwealth History

“This case study offers broadly applicable insights into the relationship between ideology, technology and politics. . . . Carefully read, this is a tale of irony about wishful thinking and the limits of knowledge.”— Publishers Weekly

کتاب The 5 AM Club